2 easy methods in the slow cooker or oven 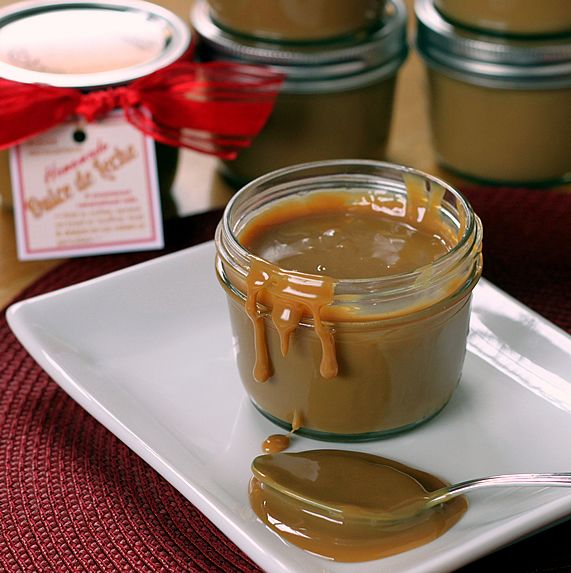 Dulce de leche has had a surge in popularity in the US in recent years. You'll find ice cream and other desserts flavored with it. Starbucks has dulce de leche coffee drinks. It can be spread on toast or drizzled on pancakes and waffles. If you haven't tried it yet, you're missing out. This stuff is totally yummy. And, it's very easy to make for yourself or to give as a gift.

Dulce de leche (translation: "sweetness of milk") is a caramel-like spreadable topping that is popular in Latin countries. Some countries make it with goat's milk, others use cow's milk. In Mexico, the common method is to start with a can of sweet condensed milk, immerse the can in water and simmer it on the stove-top for several hours. (More info about dulce de leche here.)

Stove-top method warning. I read warnings about the hazards of immersing unopened cans in simmering water on the stove-top. Although this is the method most commonly used, it can be risky. If the water level gets too low, the result can be exploding cans. Yikes! No thank you. There are also concerns about the BPA from the heated cans leeching into the dulce de leche. No thank you.

Two safer, easier ways. I experimented with several methods before settling on the two I'm sharing in this post: cooked in the oven or in a slow cooker. Both of these are easy, safe, and produce deliciously creamy dulce de leche. I prefer the oven and slow cooker methods, because the sweetened condensed milk isn't heated and cooked in the can--it is transferred to other containers before being cooked. That eliminates the risk of exploding cans or BPA contamination. Also, you can visually see when the milk has caramelized and darkened enough; when cooked in the can, you have to guess and use trial-and-error to estimate how long to cook it.

This is how David Lebovitz makes dulce de leche. I've made several batches this way, and it works great.

Step 1. Start with canned sweetened condensed milk. Any brand will do. I normally cook 2 cans at one time. But, you can make whatever quantity you prefer. You also need two shallow, oven-proof containers that nest, like a pie plate inside a roasting pan, or something similar. There needs to be at least an inch between the outside edges of the nesting pans. I used an 11x7x1" (2 quart) baking dish inside a 15x10x2" (4.8 quart) baking dish for cooking the contents of 2 cans. 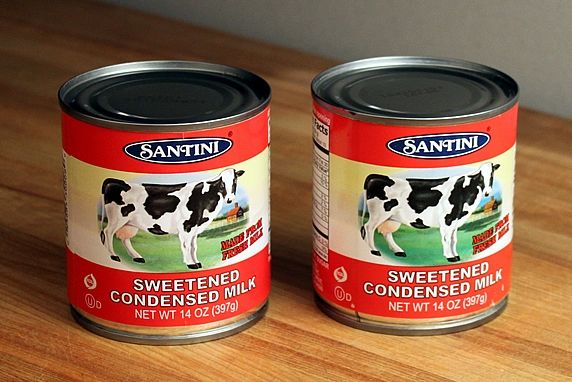 Step 3. Cover the dish with foil. 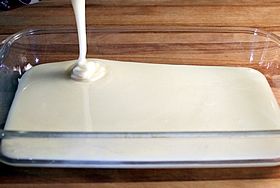 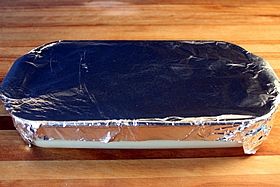 Step 5. Put it in a 425 degree oven for 1 to 1-1/2 hours, until it is caramelized and browned. Check a few times while it bakes and add water, if necessary, to keep it at the same level.

I recommend checking it after 1 hour to see if it's caramelized enough--you decide how brown you want it. The mixture in the photo below wasn't quite as dark as I like mine, so I returned it to the oven. For me, it took the contents of two cans 1-1/2 hours. If you're cooking 1 can, it won't take as long. Just keep your eye on it, and remove the pan from the oven when it's to your liking. 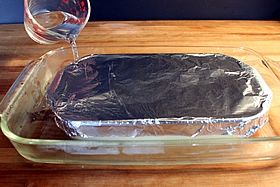 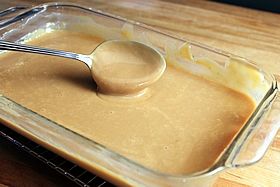 After the cooked mixture cools, whisk it until it's smooth (use a whisk, electric mixer, or immersion blender). Transfer it to a jar or covered container and store it in the fridge. 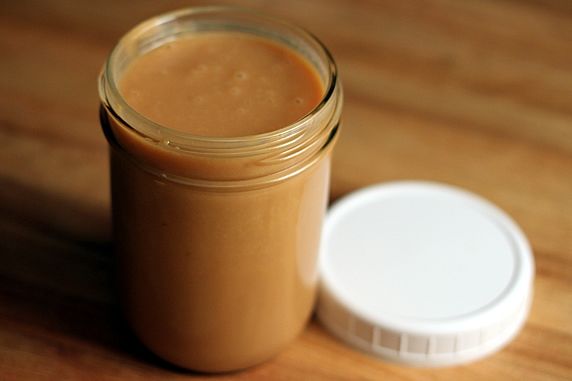 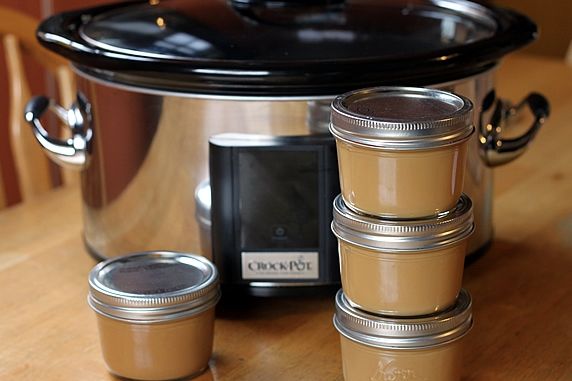 This is my favorite way to make dulce de leche. It's easy and cooks right in the jars that it will be stored in or given as gifts. I'd read where others had cooked the unopened cans in the slower cooker, but they had problems with the cans rusting and staining the interior of their slow cookers. Also, there's the same BPA contamination issue when it's cooked in the cans. So, I tried transferring the sweetened condensed milk to canning jars, and immersing those in water in a slow cooker. The results? FANTASTIC! This no-fuss method couldn't be easier. I also like that you can peek at the clear jars and tell by the color when it's time to remove them. No guess work like you'd have when cooking in the cans. It's smooth and delicious, straight from the jar; so no need to whisk out lumps as with the oven method.

Step 1. You need cans of sweetened condensed milk and canning jars with tight-sealing lids. The size of jars will depend on the size and shape of your slow cooker. There needs to be enough room to cover the jars with 1" of water. I have a 6-1/2 quart oval Crock Pot. Wide-mouth 1/2-pint jars were the best size for my slow cooker.

Step 2. Pour the sweetened condensed milk into the canning jars. Two 14-oz cans perfectly fill 3 of the 1/2-pint jars. So, I cooked 3 jars at a time. Although 4 jars would fit in my slow cooker.

Step 3. Put the lids on the jars and screw on the ring tops until they are finger tight. 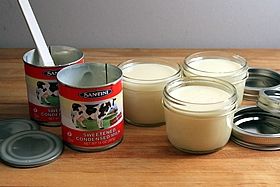 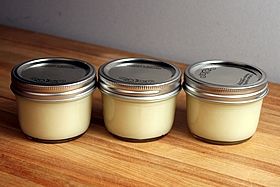 Step 4. Place the jars in the slow cooker and fill with hot tap water so that there is an inch of water over the top of the jars. (Starting with hot water gets the cooking off to a faster start.)

Step 5. Cook on low for 9-11 hours. After 9 hours, remove a jar with tongs to see if the caramel color is dark enough. If not, return and continue cooking.

In my slow cooker, 3 jars took 10 hours to be cooked to perfection. 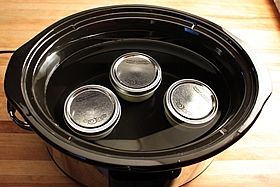 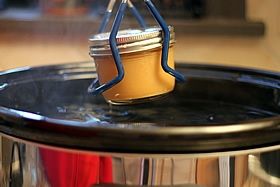 Place the wet jars on a dish towel, and leave them undisturbed until they cool to room temperature. The jars have been sitting in water for hours, so there may be a little bit of rust starting to form around the ring. Gently remove the ring, and dry off the lids; any rust should wipe off easily. 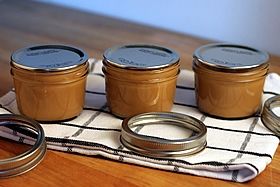 They're sealed, too! I've made 3 batches of these now, and each time the jars all sealed when I removed them from the slow cooker. This was an expected surprise. (If you're not a canner, that means that the little raised "button" in the middle of the lid is concave and there's no give when you press it.) Even though they're sealed, I don't know for sure that they would be safe to store out of the fridge. So, I keep mine in the fridge. But, the sealing will definitely extend their fridge shelf life. How long? I don't know for sure, because I just started using this method. But, mine have been good for at least 1 month.

The slow cooker dulce de leche is thick and velvety smooth right out of the jar you cooked it in. There's no need for whisking. That means it can be served or given as gifts, just as it is. 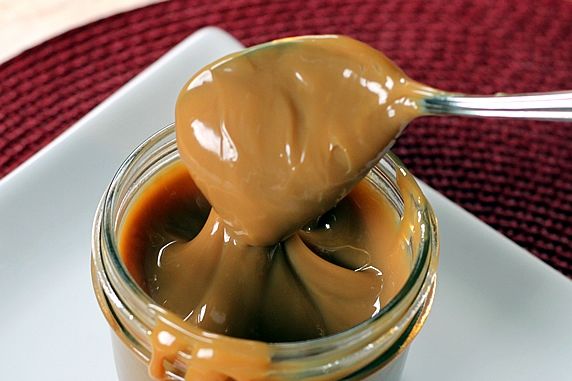 A great gift idea! Dulce de leche is so versatile and delicious, that it's a great gift for pretty much anyone. The jars cooked in the slower cooker are the perfect size for gift-giving. Just add a tag and ribbon, and the gift is complete. 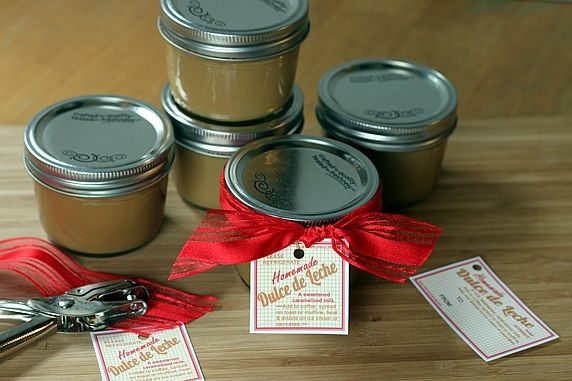 Print a sheet of these tags for adding the finishing touch to your gifts.

To use the tags:

If you don't have a printer or specialty papers, you can have a store with printing services download and print them for you. 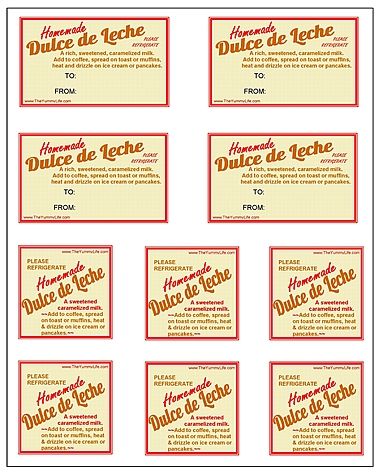 Serving suggestions. Dulce de leche is used in Latin countries in a variety of ways. Spread it on toast like you would peanut butter. Heat it gently in the microwave and drizzle it on pancakes or waffles. Try it as a fruit dip; I especially like it with apples. It also can be used to flavor a variety of desserts like ice cream, cookies, and frosting.

I like to stir a spoonful of dulce de leche into my coffee. 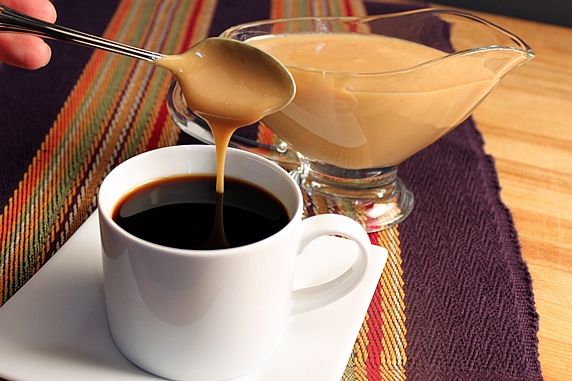 It adds sweetness and creaminess at the same time. An ordinary cup of coffee becomes a dessert coffee. Yum! 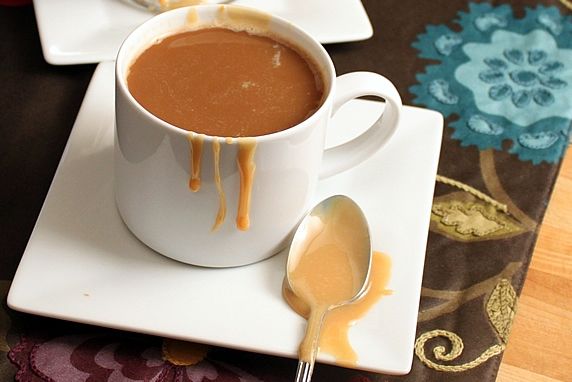 At our recent Mexican Buffet Dinner Party, I added dulce de lech to the coffee tray. 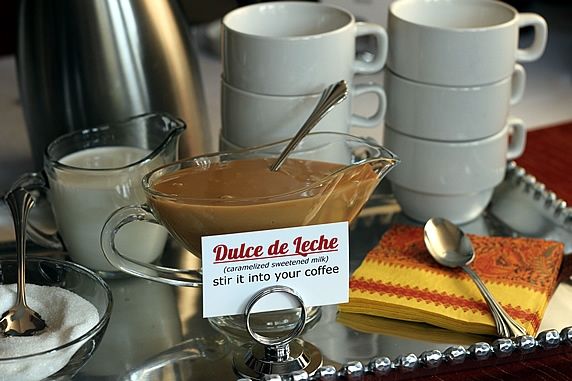 At that same dinner party, I made mini brownie bites topped with dulce de leche. King-Man raved about them. Here's that recipe. 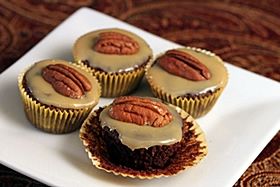 However you use it, however you like it, dulce de leche is easy to make and keep on hand in your fridge. You might even be tempted to just eat it by itself, a spoonful at a time. I may have done that once or twice. Shhh. 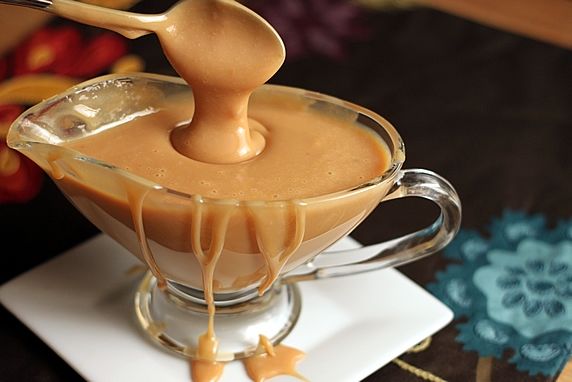 
Dulce de Leche. Cook this delicious, creamy topping in a slow cooker right in the jars that are used for serving or gift-giving. Free printable tags, too!