While the turkey cooks, make this for use in gravy, stuffing, or soup. 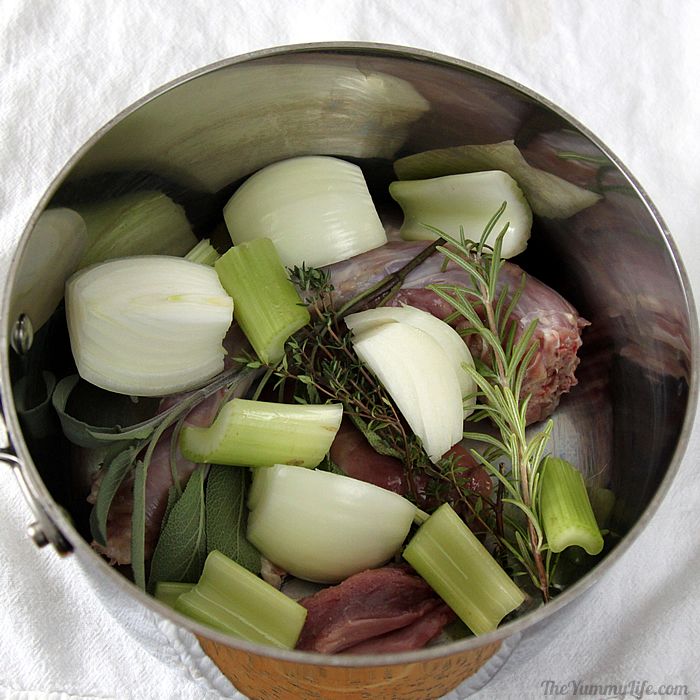 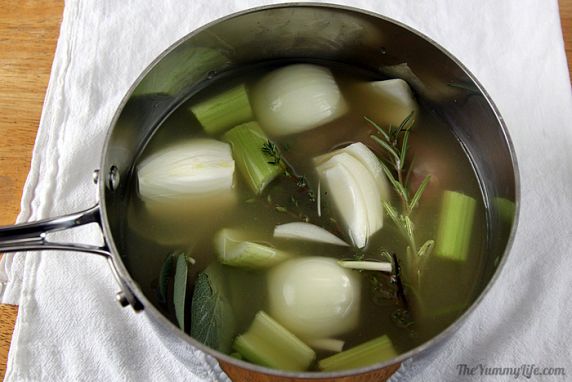 This quick and easy broth can be made while the turkey cooks, so it's ready in time to use in gravy or stuffing.


Directions
Add all ingredients to a 1-1/2 to 2 quart saucepan. Bring to boil, reduce to a simmer, cover, and simmer on low heat for at least 1 hour. Pour through a mesh metal strainer to remove solids.

Broth may be combined with turkey pan drippings to make gravy. Or, use the broth to moisten stuffing. It also may be used in soup.

Broth may be stored in the fridge for 3 days or frozen for several months.

Have you ever removed the neck and giblets from a turkey and wondered what in the world to do with them? Most often they get thrown away.

My mom, who could never let anything go to waste, always used the turkey neck and giblets to make a quick pot of broth to use for making gravy or moistening stuffing. And, that's what I do. This broth is so much more flavorful than anything that comes out of a can or box. You can simmer a pot of it while the turkey is in the oven, and it will be ready to use long before the turkey is finished cooking.

I always think of this broth as being virtually free, because I use turkey parts that would otherwise be discarded. And, I normally have leftover herbs, onions, and celery, since those often come in larger quantities than I need for my other recipes for the meal.

Note: I don't add salt to my broth, because I prefer to add salt later when I'm using it in a recipe. That reduces the risk of over salting.

Where the heck is the neck? Normally, you'll find the neck inside the cavity at the tail end of the turkey.

The bag of giblets is usually stuck under the flap of skin that is covering the neck end of the turkey.

Here's what the individual parts look like. (Not very appealing, are they?) Normally a giblet bag has a gizzard, liver, and heart; but this can vary. Once I had a turkey that didn't have a giblet bag at all. This broth recipe is flexible. Just use whatever is included, and your broth will be fine. Even without the giblets, the neck alone made a flavorful broth. 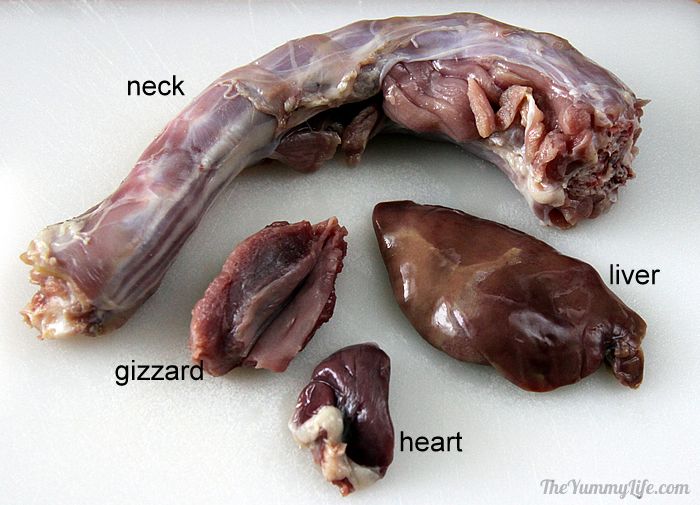 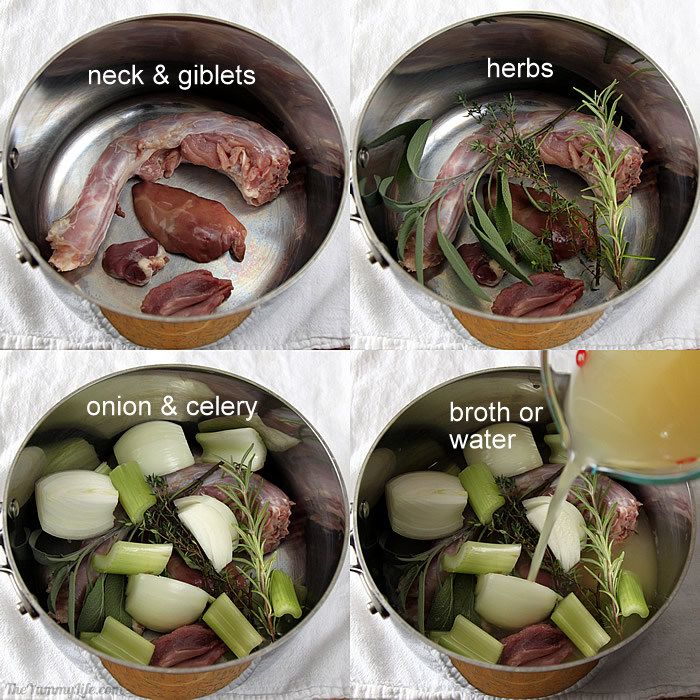 Step 3. Bring to a boil, lower heat to a simmer, cover and cook for at least 1 hour. It's fine to let it simmer longer than that. I normally leave mine on low on the stove top until I need it. 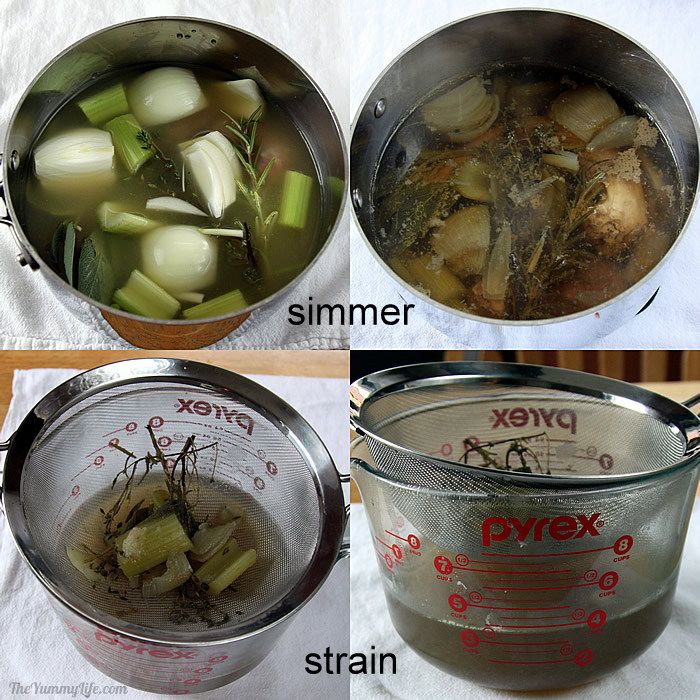 Use now or save for later. The broth can be used right away to flavor gravy or moisten dressing. If you don't need this broth for use in preparing your turkey dinner, save it for making soup later. It can be refrigerated for 3 days or frozen for months. Or, if you don't want to bother with making broth while you're making the rest of the meal, freeze the raw neck and giblets, and save them to use at a later date.

What to do with the cooked giblets that are leftover? Some people like to make giblet gravy. The cooked giblets can either be chopped or pureed and added to gravy. Personally, I'm not wild about giblet gravy, so I throw them away after I've used them to make the broth.

Making this broth is one of those old school methods that has staying power in my kitchen. It's quick, easy, economical, healthy, and flavorful. That's a win in my book.

Turkey Neck & Giblet Broth
By Monica              Servings: makes 3-1/2 cups
Ingredients
Directions
Add all ingredients to a 1-1/2 to 2 quart saucepan. Bring to boil, reduce to a simmer, cover, and simmer on low heat for at least 1 hour. Pour through a mesh metal strainer to remove solids.

Broth may be combined with turkey pan drippings to make gravy. Or, use the broth to moisten stuffing. It also may be used in soup.

Broth may be stored in the fridge for 3 days or frozen for several months.


Turkey Neck & Giblet Broth. It's quick and easy to make while the turkey cooks. Combine it with pan drippings to make gravy, or use it to moisten stuffing. from The Yummy Life


Home    |    Recipes    |    Archives    |    About The Yummy Life    |    Contact
We are a participant in the Amazon Services LLC Associates Program, an affiliate advertising program designed to provide a means for us to earn fees by linking to Amazon.com and affiliated sites.
Privacy Policy - © 2023 The Yummy Life - All rights reserved