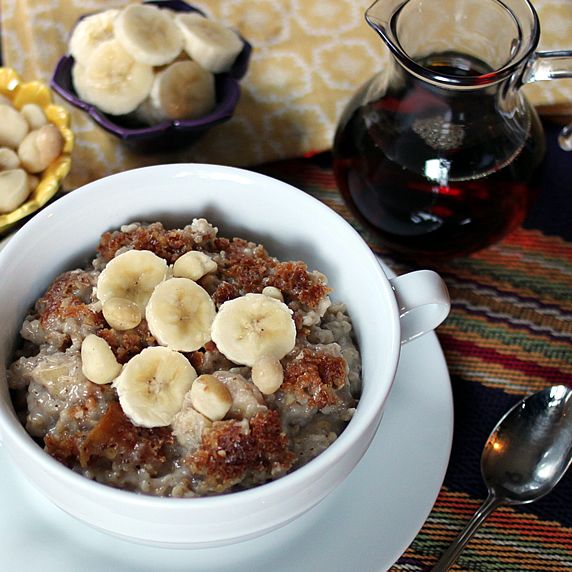 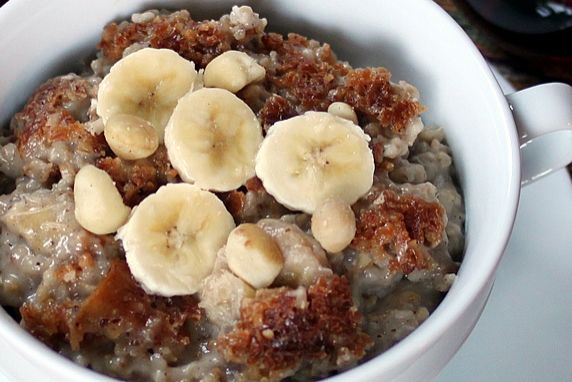 Make this the night before and wake up to the wonderful aroma of this nutritious, delicious, ready-to-eat breakfast. The coconut milk makes this a lactose-free, vegan recipe. It's a healthy power house that will help you beat the hungries all morning.

*Find coconut milk in the Asian aisle of your grocery store.

This cooks while you sleep, so you can wake up to the aroma of a delicious, ready-to-eat breakfast. The oats, flax seed, bananas, and coconut milk will give you the fuel to keep going all morning. It's lactose free and vegan, too.

Last year I shared two recipes for Slow Cooker Steel Cut Oats, one was apple-cinnamon and the other was cherry-almond. They are healthy, hearty breakfasts that have been very popular with readers. So I thought it was time to try out a new flavor. Today's recipe turns out to be my favorite so far. Totally yummy, filling, and good for you.

It was Yummy reader, Bella, who got me thinking about using coconut milk when she asked in the apple cinnamon oatmeal comments about substituting coconut milk for the skim milk in that recipe. I had previously only used coconut milk in Thai cooking and was intrigued with the idea of cooking it with oatmeal. Bella was onto something. The coconut milk adds a creamy richness to the oatmeal that is unbelievably delicious. It's naturally sweet and is a perfect complement to bananas.

Coconut Milk is good for you, too! Although previously believed to be bad for you because of its saturated fat, now it is touted as a super healthy food. That's because it has a kind of saturated fat that quickly turns into energy, instead of being stored as fat like the "bad" saturated fats. Coconut milk is loaded with vitamins and nutrients and can actually boost metabolism and contribute to weight loss. (More information about its health benefits here.)

A power breakfast! Coconut milk is high in calories, so I used a light version in this recipe. The bananas, steel cut oats, cinnamon, and flax seed are also loaded with nutrition, making this a power breakfast!  And just wait 'til you taste it. So good.

*I recommend using very ripe bananas. The ones in the picture below could be even riper with more brown spots. Ripe bananas are sweeter and more flavorful. Also, I have learned that as they ripen their starch content is reduced; and this helps them cook without turning a pinkish/purple color. I have had the most success with flavor and color using well ripened bananas.

*Canned coconut milk is located in the Asian aisle of most groceries stores. There is another kind of coconut milk sold in cartons (often in the health food aisle); this works well, too. 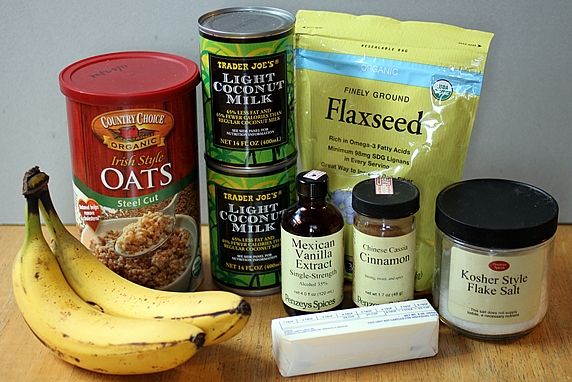 Step 2. Add all of the ingredients to a slow cooker. I have a 6-1/2 quart slow cooker, but 3-1/2 quarts is big enough for this recipe. I can double the recipe in my slow cooker when I'm feeding more than 4 or 5 people. 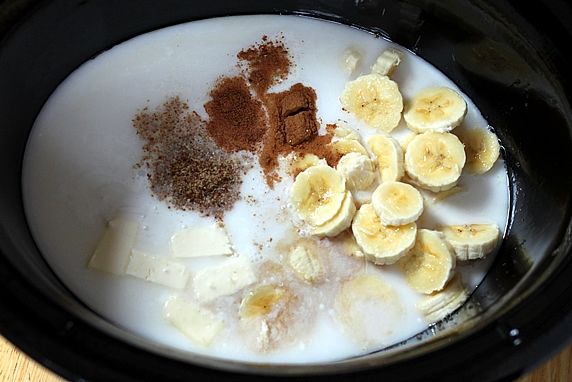 Step 3. Stir it. Put on the lid. Set it to cook on low for 7 hours. That's how long it takes in my slow cooker, anyway. The cooking time can vary greatly from one slow cooker to another, so read my tips below for How To Avoid Overcooking Your Oatmeal.

Step 4. Go to bed. Wake up to the sweet aroma of bananas and coconut milk.

Don't lift the lid until it's done. If you do, you'll have to add 20-30 minutes to the cooking time for every time the lid is lifted. 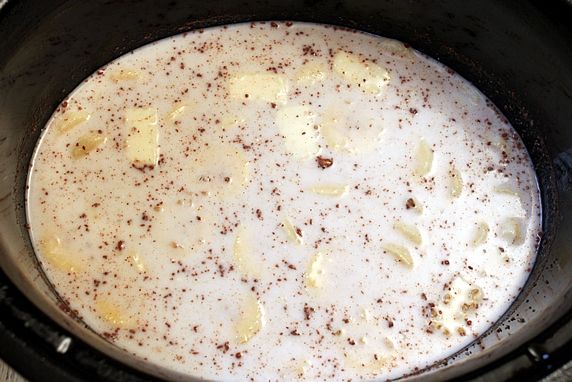 Here's how it looks after 7 hours of cooking. Admittedly, not that appealing...YET! 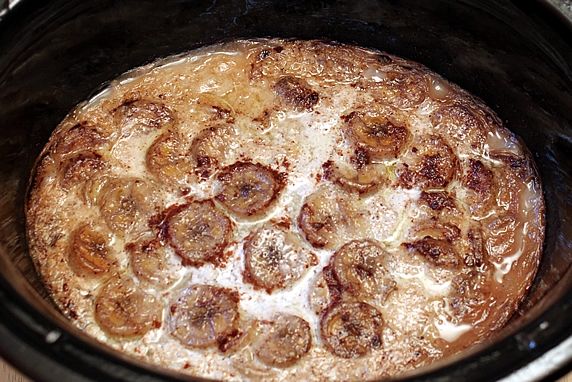 Dig out a spoonful from the bottom to reveal the creamy goodness of the finished oatmeal. It gets caramelized and crusty around the edges of the slow cooker. That's my favorite part. The bananas break apart and distribute as you stir. The coconut milk makes this recipe particularly creamy and rich.

How To Avoid Overcooking Your Oatmeal. My overnight oatmeal was perfect after 7 hours of cooking, and I was lucky that it turned out perfectly with the first try. Although many have had the same success, some readers have commented that their oatmeal was burnt and ruined after 7 hours--that was too long in their slow cookers. There can be some trial-and-error in figuring out exactly how long to cook this in your slow cooker--they can vary a lot in temperature and cooking time. Here are some tips to try:

view on Amazon:  heat-proof bowls for double boiling in slow cooker
(The largest bowl in this set fits inside my slower cooker)

Here are some optional toppings that are great with this oatmeal:

My favorite toppings are macadamia nuts and a few freshly sliced bananas. It's sweet enough for me as it is, but you may want to add some maple syrup or brown sugar if you like your oatmeal on the sweeter side. 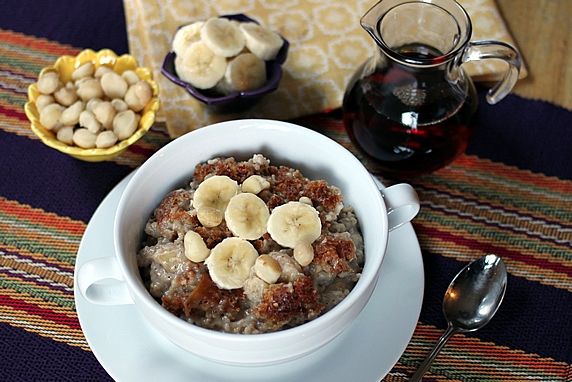 Is it really possible for breakfast to taste like dessert and still be good for you? 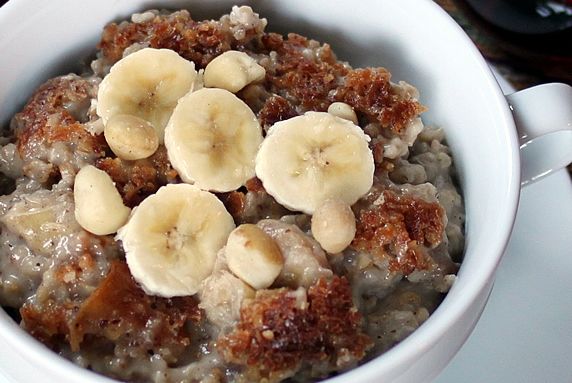 Like the other recipes, it freezes and reheats well. 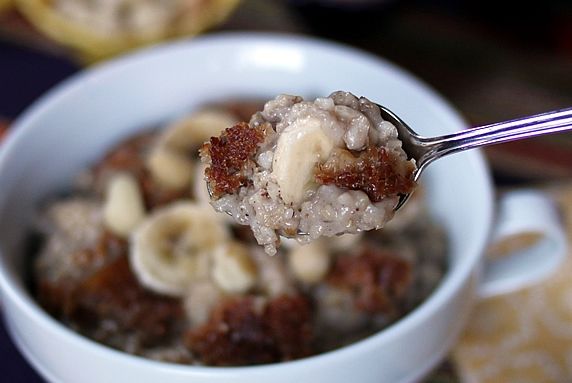 In case you missed them, here are links to my other steel cut oatmeal recipes.

*Find coconut milk in the Asian aisle of your grocery store.