with ham, or without for vegan & vegetarian version; gluten free 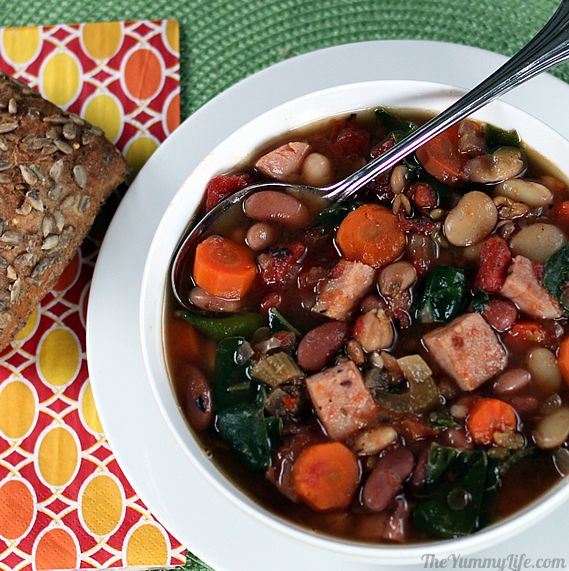 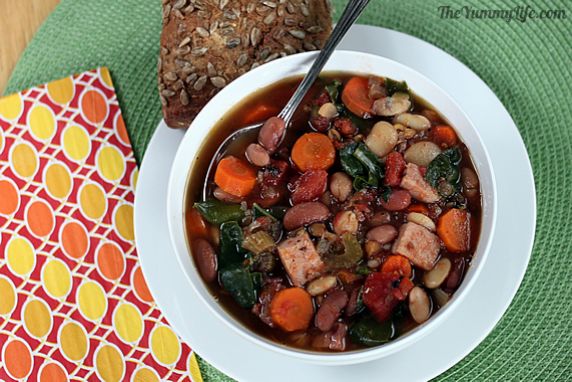 This hearty soup is packed with flavor, fiber, and nutrition. It's naturally gluten free and is easy to adapt for a vegan/vegetarian version.

*If you prefer, you can soak the beans in water overnight, rinse and drain them, and add them with the other ingredients to the slow cooker the next day.

This easy, nutritious soup can be assembled the night before so it's ready to plug in the next morning. At the end of the day, a delicious, hearty dinner is ready that is packed with flavor, fiber, and nutrition!

There was a little family drama over this soup. You see, King-Man HATES beans of any kind. I know, I know, but I do try to set that aside and love him anyway. When he asked me what post I was working on and I said, "A yummy 15 bean soup," he said it should be called "15 Bean Soup from Hell." In his book, any soup with that many kinds of beans defines hell. Poor man, he doesn't know what he's missing. So, I froze this soup in individual portions and have been reheating and enjoying it for lunch. All by myself.

Easy vegan, vegetarian, and gluten-free options. I added ham to mine. For a vegan or vegetarian version, eliminate the ham and use vegetable broth in place of chicken broth. To make it gluten-free, just make sure the beans weren't processed with machines that may have been contaminated by other gluten products--read the packaging to be sure. Beans are naturally gluten free.

Nutritional Information. The beans and veggies in this soup make it a meal that is loaded with nutrients. It is high in fiber, manganese, magnesium, potassium, thiamin, vitamin C, & iron. It is very high in vitamin A with 100% of the daily requirement in a single serving. Here's the nutritional breakdown for 1 cup of this hearty soup: 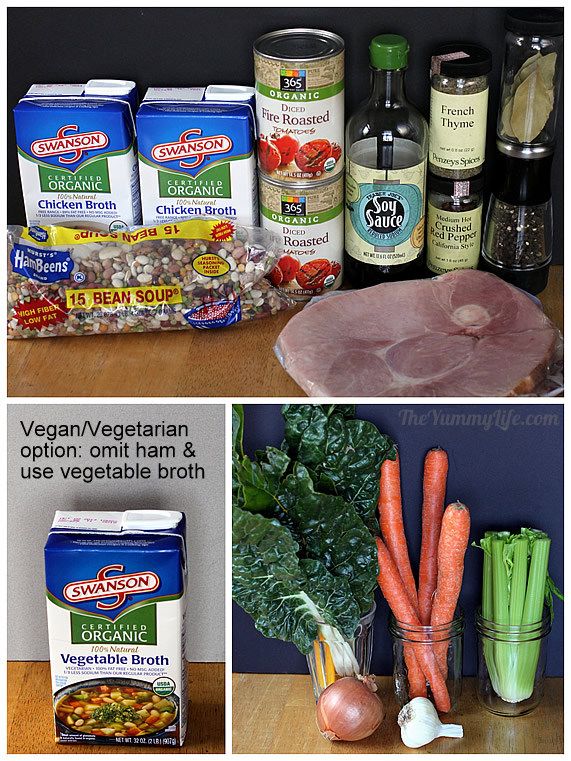 Step 2. If your beans came with a seasoning pack, discard it. Pick through the beans and discard any rocks or bad looking beans. Rinse them well in a wire strainer & drain them.

After they're rinsed, the beans need to be soaked in liquid overnight. There are 2 options:

Here's how to proceed with preparing the other ingredients. 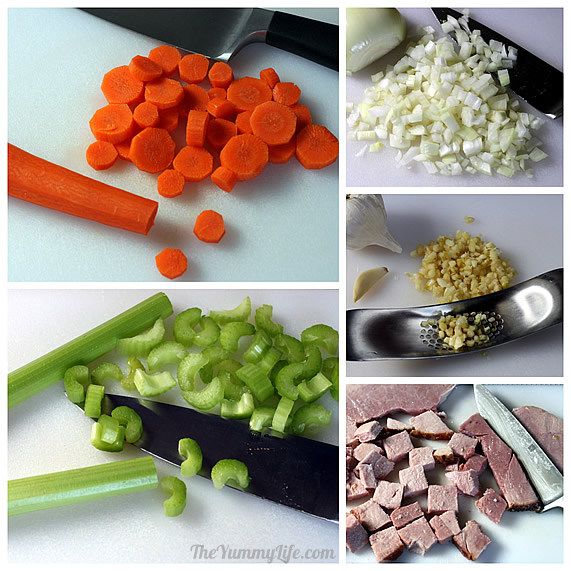 Step 5. The Swiss chard (or kale) isn't added until the end of the slow cooking. So, it can be cut, covered, and refrigerated for use later. Here's how to cut it. First fold a leaf in half lengthwise with the stem/spine along the folded edge. Cut off the stem and discard. Chop the remaining leaf halves into 1/2" strips. 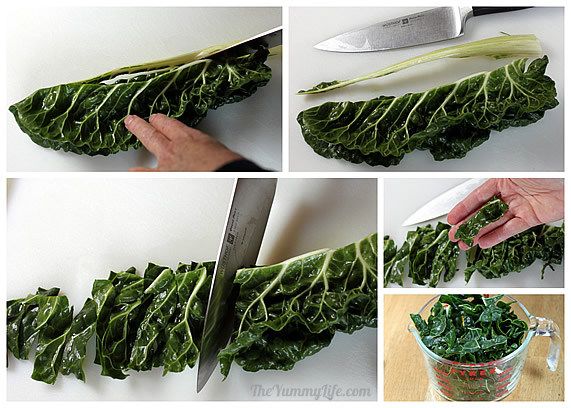 Step 6. Add all of the seasonings, ham, and veggies to the slow cooker, except the Swiss chard and one can of tomatoes. Pour in the broth and stir. 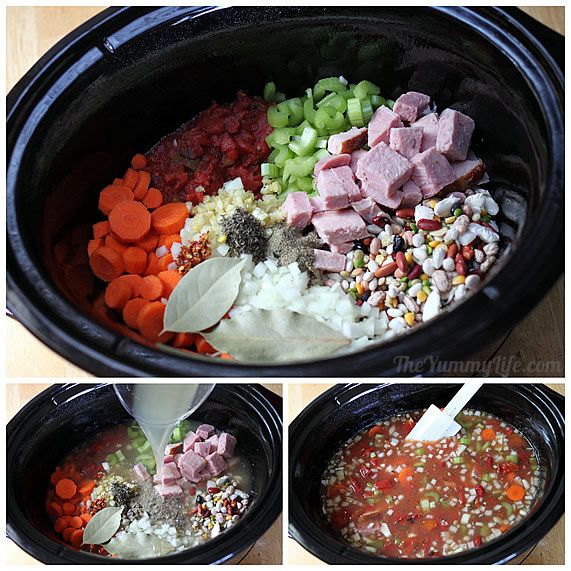 Step 7. Put on the lid refrigerate over night (8-12 hours), or cook right away if beans have been pre-soaked. Cook on low for 8 hours until beans are tender.

Step 8. Remove bay leaves, add remaining can of tomatoes, chopped Swiss chard (or kale), stir, cover, and cook for another 20-30 minutes until Swiss chard is cooked and tender. 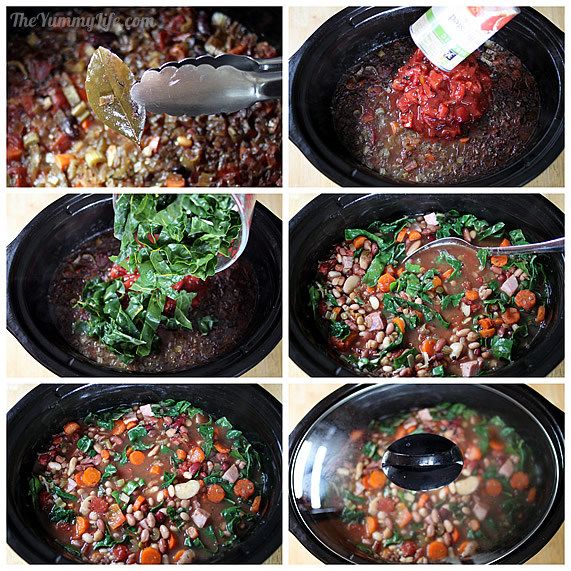 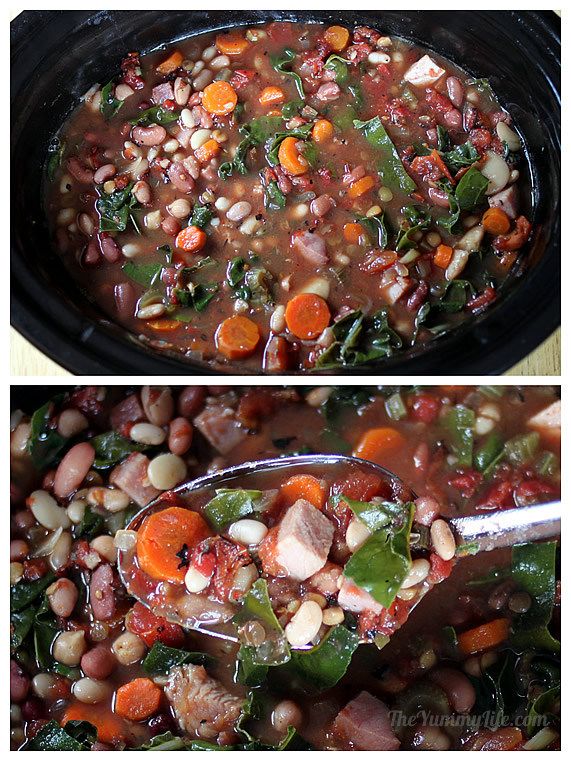 I like to eat mine with a hearty, whole grain roll. It's good with cornbread, too. 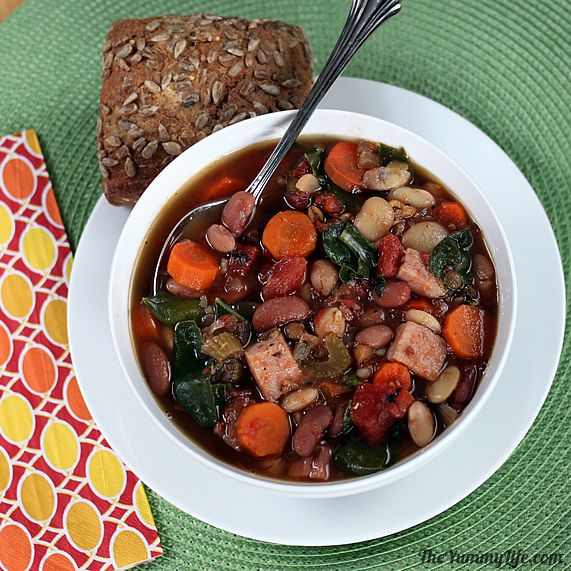 Freeze and reheat. I portion mine into serving size containers and refrigerate or freeze it. That way I have a healthy, hearty lunch at the ready. 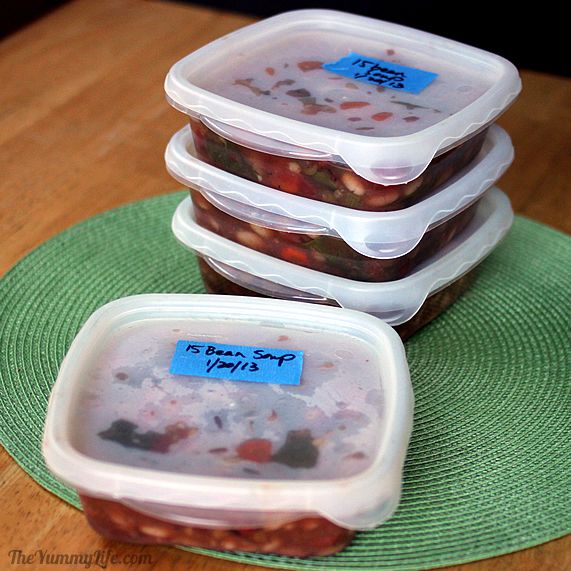 How King-Man can call this the Soup from Hell, I'll never understand. But, that's okay; it means there's more for me. 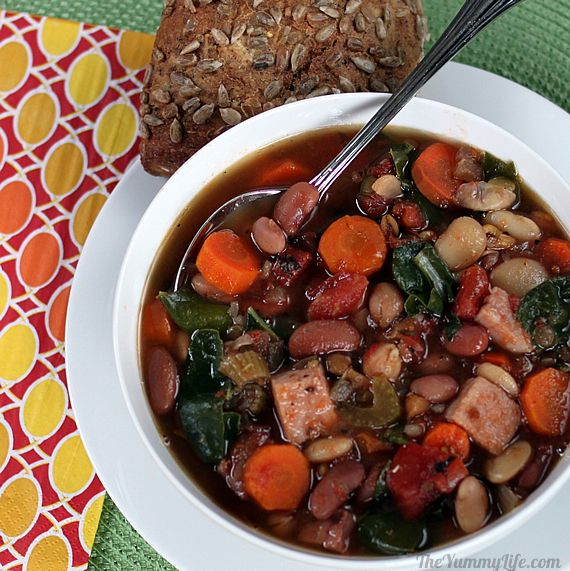 Make it a Yummy day!
Monica

Want more Slow Cooker recipes? I get lots of great tips & recipes from this cookbook by Cooks Illustrated. It's my favorite slow cooker cookbook.

*If you prefer, you can soak the beans in water overnight, rinse and drain them, and add them with the other ingredients to the slow cooker the next day.


Home    |    Recipes    |    Archives    |    About The Yummy Life    |    Contact
We are a participant in the Amazon Services LLC Associates Program, an affiliate advertising program designed to provide a means for us to earn fees by linking to Amazon.com and affiliated sites.
Privacy Policy - © 2023 The Yummy Life - All rights reserved