I remember the first time I asked my mom (aka Grammy) to teach me how to fry chicken.  I was an 8th grader.  Grammy always started with a whole chicken and cut it up--it was cheaper and better that way she said.  That raw chicken totally grossed me out.  It was slimy.  Ewwwww.  But, I got over it; and I learned to clean, cut and fry a chicken.

Nevertheless handling raw chicken has continued to be kinda scary. I read so much about the dangerous bacteria it can harbor if it's not handled and cooked correctly. I was always told to, first of all, wash it well under running water.  That's supposed to wash away that icky bacteria stuff.

And then there is the problem of cooking it enough, but not too much.  If you undercook it, chicken is dangerous to eat and can make you sick.  If you overcook it, chicken gets so tough and rubbery that you can roll it into a ball and play a round of tennis.

Well, I've gradually figured out a way to prepare and cook raw chicken--boneless, skinless breasts, to be specific--so that they are completely cooked through but remain moist and tender.  Every time.  I haven't prepared undercooked scary chicken or overcooked rubber chicken in a very long time.  Let me tell you what I've learned to do.

TO WASH OR NOT TO WASH

But, first of all, I must reveal that everything I believed about washing chicken has recently been disproved.  You're not supposed to wash raw chicken before cooking it. Seriously?

Seriously. The USDA has recently come out with a report stating that rinsing chicken with tap water actually increases the risk of food poisoning.  Tap water can't kill the bacteria that might be on raw chicken, and it's impossible to wash it all away. The only way to kill the bacteria is by cooking the chicken thoroughly to a high enough temperature.  All you accomplish by washing raw chicken under running tap water is to increase the risk of splashing the bacteria all over your sink and surrounding area.

So, I'm not washing raw chicken any more.  It's hard.  Very, very hard.  It just seems wrong.  But, I'm going to assume that the USDA knows more about this than me.

TO BRINE OR NOT TO BRINE

On my search for perfectly cooked, moist chicken breasts, I've tried various versions of brining--that's soaking/marinating the chicken in a solution that contains, among other things, a large quantity of salt.  I've had some good results from brining. Problem is, King-Man has recently developed high blood pressure.  That means I'm cutting way back on salt in my kitchen. For me, the simple techniques I explain below make the chicken every bit as moist and tender as brining, and at the same time it's faster, easier, healthier.

SO, WHAT'S THE SECRET?

I wish I had something more exciting than this to share, but here goes.  I have found the best way to cook tasty, moist and tender boneless chicken breasts is:
Don't overcook them.
That's it.  Trouble is, that's easier said than done.  But, there is a way.  First you pound the chicken breasts to an even thickness all over, and then you use an instant read thermometer to make sure you cook them to exactly the right temperature of 165 degrees to be perfectly cooked.  Read on.

I use 2 important cooking gadgets to prepare and perfectly cook boneless chicken breasts:

Pounding the chicken breast to an even thickness means the whole piece reaches the correct temperature at the same time. Otherwise, you overcook the thinner parts of the breast while you're waiting for the thicker parts to get done. There still can be a lot of guess work about when the chicken is done. So, most of us err on the side of caution and overcook the chicken. It ends up dry and rubbery.

That's where the instant read thermometer comes in.  The thermometer is essential because it is the only way to know that you are cooking the breasts to the required 165 degrees--that's the temp where the breasts are cooked completely and any bacteria is killed.  It also ensures that you don't overcook the meat.  Beyond 165 degrees, the chicken will get increasingly dry and rubberized. Whether you're grilling, baking, or pan frying your chicken, check the internal temp before taking it away from the heat. This was a huge relief for me.  I never have to wonder again if my chicken is cooked enough, but not too much.  Just take it's temperature!

Here are the meat pounder and instant read thermometer that I recommend. 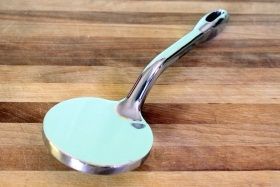 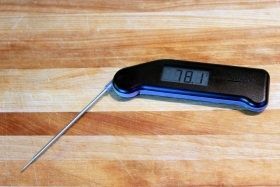 These 2 helpful gadgets were both the #1 recommendation of Cooks Illustrated magazine, a source I trust completely.  They've never let me down.  The thermometer is expensive.  But, after trying at least a half dozen cheaper instant read thermometers, I can tell you that this one absolutely rocks!  I am so sold on it, that last year I gave this as a Christmas gift to several of the serious cooks in our family. I use it almost every time I cook meat of any kind--no more overcooked burgers or steaks.  You can click on the link above and read the reviews to decide for yourself if it sounds like something you want now or on a wish list for later.

Update: I just learned that Cooks Illustrated has recently recommended a relatively inexpensive instant read thermometer, in addition to the one I have.  The cheaper one doesn't have all of the features of mine, but it is a much more affordable option. I haven't used it and can't personally recommend it; but I trust CI's testing.

HOW TO PREPARE THE RAW, BONELESS, SKINLESS CHICKEN BREASTS

I like to purchase hormone-free, antibiotic-free chicken when I can.  It tastes better, and it's better for me and the planet.  It can be pricey, but it's more affordable when I buy it in bigger packs.  So, I'm starting with a pack of 7 boneless chicken breasts.  I'm only cooking for two, but I like to prepare extras and freeze them. Saves money now and time later. 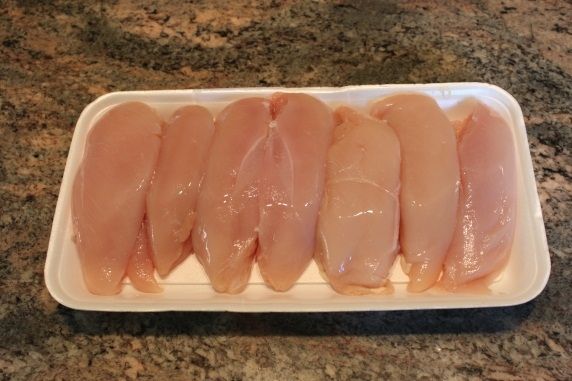 Step 1: Insert a single chicken breast inside a ziploc bag. You can also put the chicken between two pieces of plastic wrap, but it's messier, harder to handle, and is more likely to spread gross chicken germs. 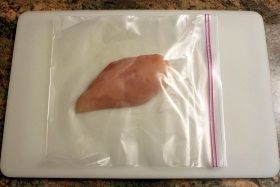 Step 2: Use a meat pounder to pound the thicker portions until the breast is an even 1/2" thickness all over. (You can also use the bottom of a skillet to do the pounding.) 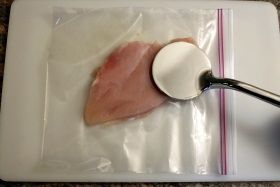 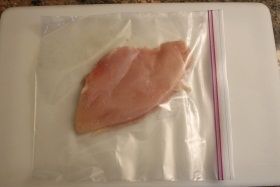 These chicken breasts were all about 1 inch thick at their thickest part, before they were pounded. Here are 2 breasts before and after pounding. They spread out as they're pounded. (Is all of this talk about pounding on breasts making anyone else squirm? Ouch.) 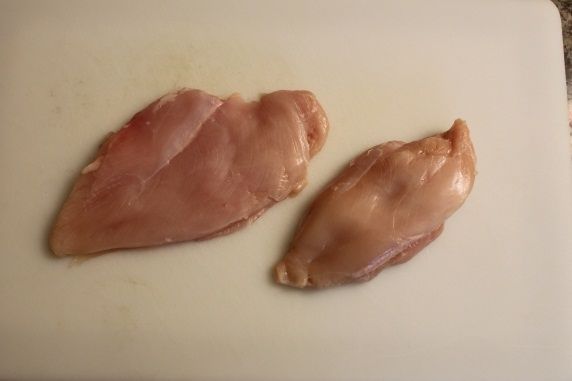 Now they're all an even 1/2 inch thick all over.  Perfectly cooked chicken breasts are on the way! 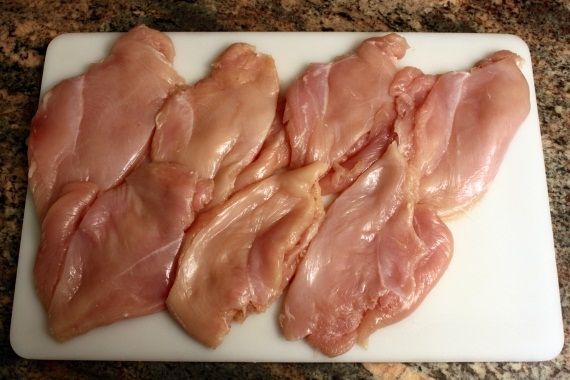 These 7 chicken breasts are ready to cook or freeze for a later day.  Another benefit of pounding the chicken, is that it makes it better for eating.  An evenly thin chicken breast is much better on a sandwich, for example, than a breast that is uneven with thick and thin bites.  It's also easier to thaw it safely and quickly, since the breast is thinner and will thaw evenly.

SUMMARY FOR PREPARING PERFECT BONELESS CHICKEN BREASTS:
1.  Pound the chicken to an even thickness all over.
2.  Use an instant-read thermometer to make sure you don't over or under cook it.

Let me know if you have any other tips for cooking chicken breasts.  After years of overcooked, rubbery chicken breasts, this simple technique has been successful for me.  How about you?

Make it a yummy chicken day!