Married to a Serial Cereal Eater

King-Man loves cereal and eats it every single day. That is, unless it’s absolutely impossible; like when we’re traveling in another country or he’s backpacking in the bottom of the Grand Canyon.

More specifically, King-Man only eats Life Cereal.
Every day.
Always for breakfast, sometimes again for a snack later in the day.  Sometimes I hear him in the kitchen in the middle of the night, his spoon hitting up against his cereal bowl as he sneaks in one more bowl of Life. He thinks he's being discreet, but I know he's there.

I know what you’re thinking:  “She’s exaggerating.”  I’d think that too if I had not lived with this weird unique man for 30 years and witnessed this myself.  I have photo evidence.  Years and years of photo evidence. 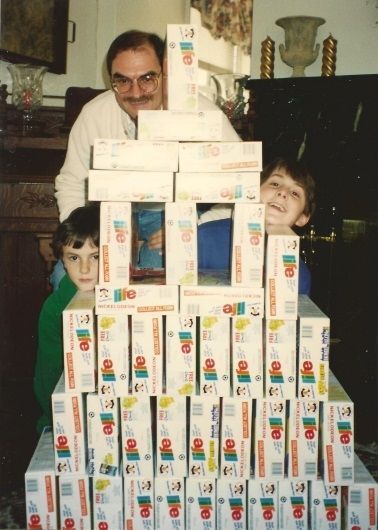 This photo was taken in 1994. King-Man is pictured with our sons who are now 25 and 28. That's right. He's been eating Life Cereal every day for a very long time.

That’s a whole lotta Life Cereal. Don’t you agree?  Monica, you might ask, why is there enough Life Cereal to stock a small grocery store?

Here’s why.  In addition to loving Life Cereal, King-Man is frugal.   Life Cereal was 2 for 1 at our local grocery store that week.  King-Man looked at the freshness dates on the box and calculated how many boxes we could purchase in advance at this sale price without it getting stale before it was all consumed.

(Have I mentioned that King-Man is an accountant?  Specifically, a university accounting professor.  Accountants do things like this.  Calculate how many boxes of cereal to buy in advance.  Scary, isn’t it?)

That explains the large quantity of cereal in the photo.  But, why, you might ask, is it stacked in a pyramid?

Well, this reveals King-Man’s playful side.  For all his weirdness uniqueness, he loved, and still loves, playing with our boys.  These Life Cereal boxes seemed like perfect building blocks at the time. They built a Life fort of sorts.  Troubling thing is, our boys grew up thinking this kind of play was normal.  King-Man definitely defined a new kind of normal in our house.  It was never dull, let me tell you.

I will not be surprised if some day we learn that Life cereal has been secretly laced with crack cocaine or some other highly addictive substance.  That might explain the enormous quantities of Life that have been consumed by King-Man.  Or, maybe he just doesn't like variety.  I guess we'll just leave it at that for now.

Are you by any chance married to a serial cereal eater? Or a serial "something else" eater? Just wondering. Is this as weird as I think it is?

This concludes my first installment of a several part saga about being married to a serial cereal eater.   There's more.  Stay tuned.


Married to a Serial Cereal Eater