A fast & simple kitchen hack that only takes seconds. 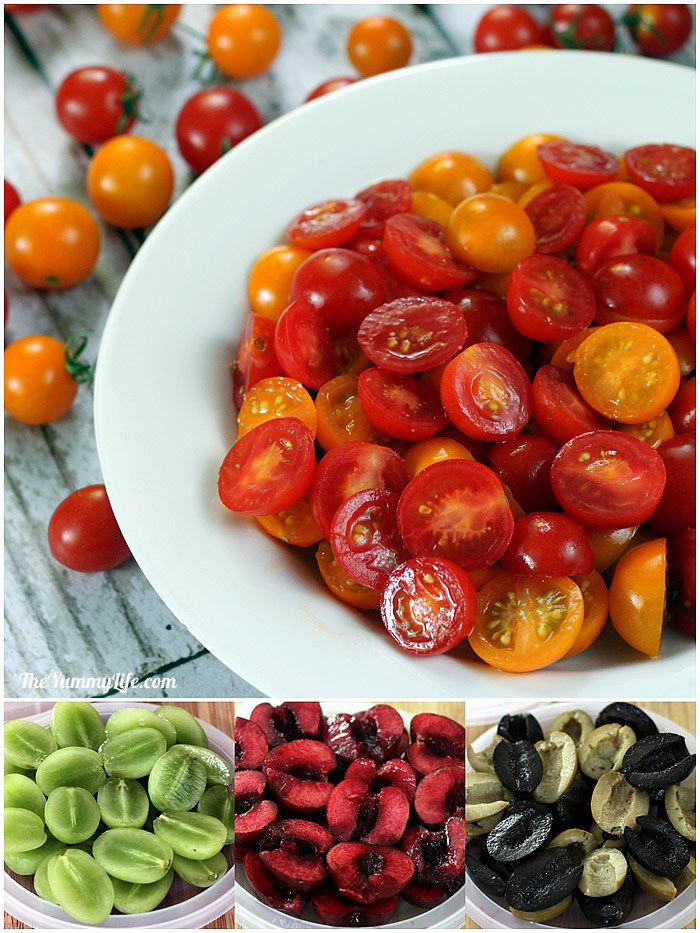 How to Cut Cherry Tomatoes (and Grapes, Cherries, & Olives) 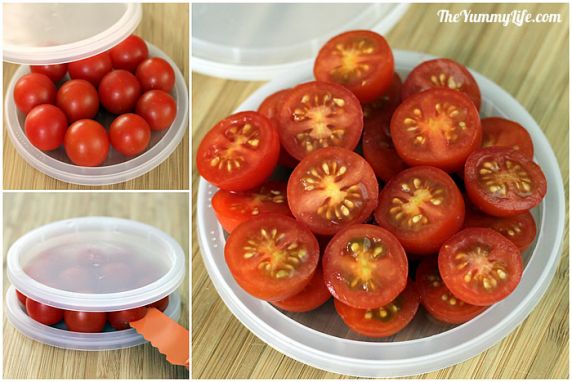 Using this simple kitchen hack, it only takes seconds to cut lots of cherry tomatoes, grapes, olives, or cherries.

Use the same procedure for cutting grapes, pitted olives, or pitted cherries.

I'm always a sucker for cool looking kitchen hacks. There are lots of them floating around the internet. Unfortunately, many of them don't work all that well once I try them out. But, this one does. It's really some kinda awesome.

I've never been particularly motivated to try this out before, because, honestly it's not all that hard to slice a few cherry tomatoes individually to throw on top of salad greens. However, recently I've been making cherry tomato salads (no greens--just lots of tomatoes) and pasta sauces. When I'm cutting 50-60 cherry tomatoes for a recipe, that's when this hack is helpful. And, boy is it helpful!

It only took a few seconds to cut these tomatoes.... 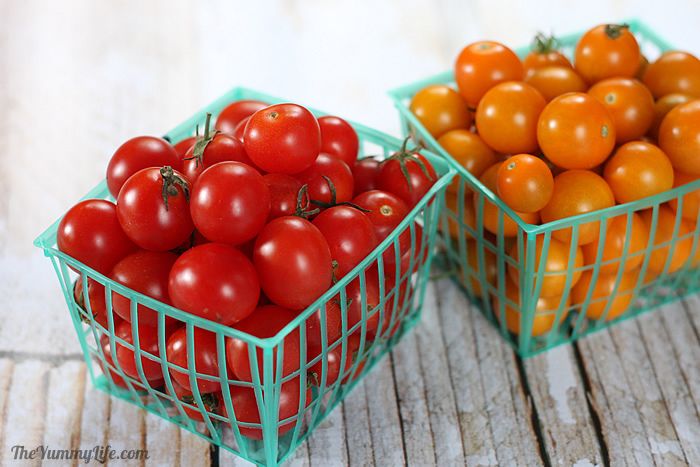 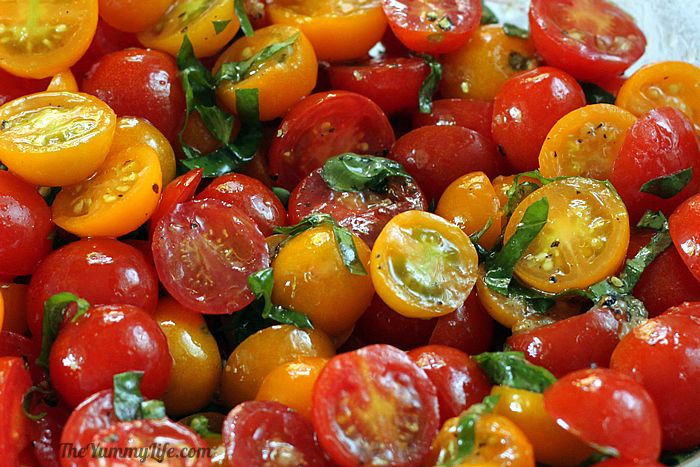 This method for slicing cherry tomatoes has been around for awhile. As far as I can tell from my Google searching, Rachel Ray got the ball rolling when she demonstrated it on her show back in 2009. Since then there have been an insane number of vidoes and posts showing similar methods. Some have tried to vary and improve on her method. I tested a number of them and came back to the original method that Rachel Ray suggested using two plastic lids. It worked the best for me--way better than using two plates as many have demonstrated since then.

It's a simple idea really. Instead of the tedious task of slicing a bunch of cherry tomatoes individually, you can place them all between two plastic lids and slice through them all in one stroke. Yep. It really works.

Two methods with a clear winner. I'll show you how to cut cherry tomatoes using 2 plastic lids vs. using 2 plates. They both work, but I much prefer the plastic lid method. I'll explain further down in the post.

Below are photos that show this simple technique. Simply sandwich the tomatoes between two rimmed plastic lids and slice through them with a serrated knife, all in one stroke. The bottom lid is rim side up, and the top lid is rim side down. Here I'm using plastic lids from 2 takeout containers. Press down on the top lid just enough to hold the tomatoes firmly in place (not enough to squish them) while you cut. I cut 14 tomatoes at once. It took seconds. Yay. 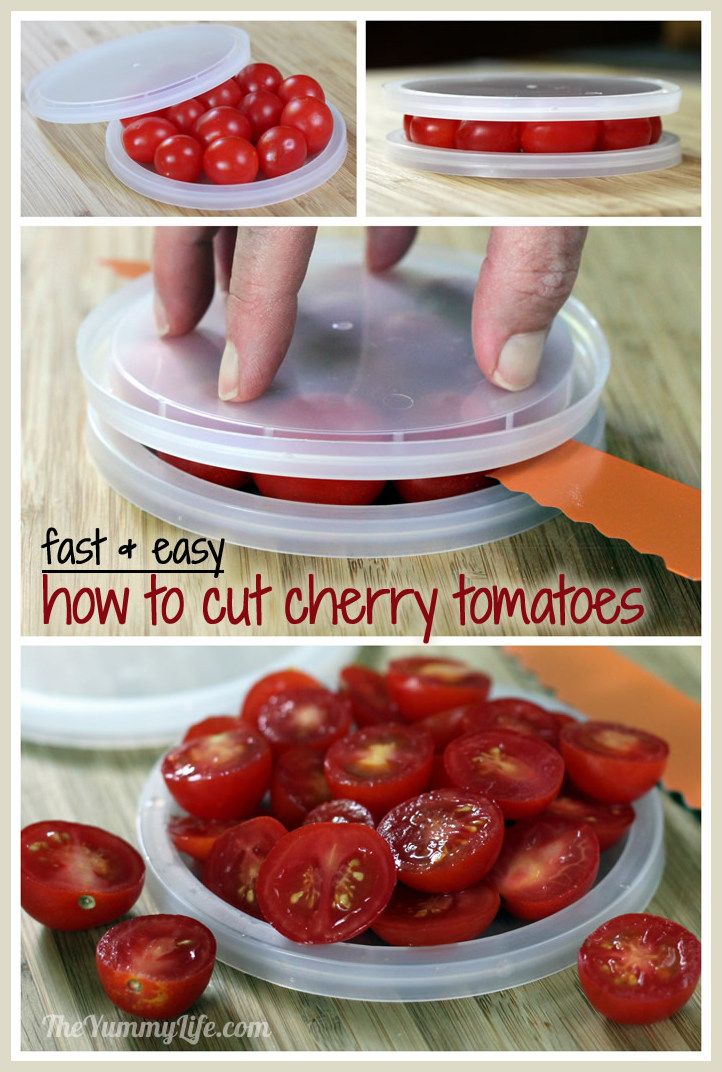 This works for cutting more than just cherry tomatoes. It works for grape and Sungold tomatoes, too--any of the "little guy" tomato varieties. I played around with some other smallish, roundish edibles and found that it's just as effective for cutting grapes and pitted olives or cherries. When you need to cut lots of these for a salad or recipe (like grapes for a Waldorf salad), this is a big timesaver. 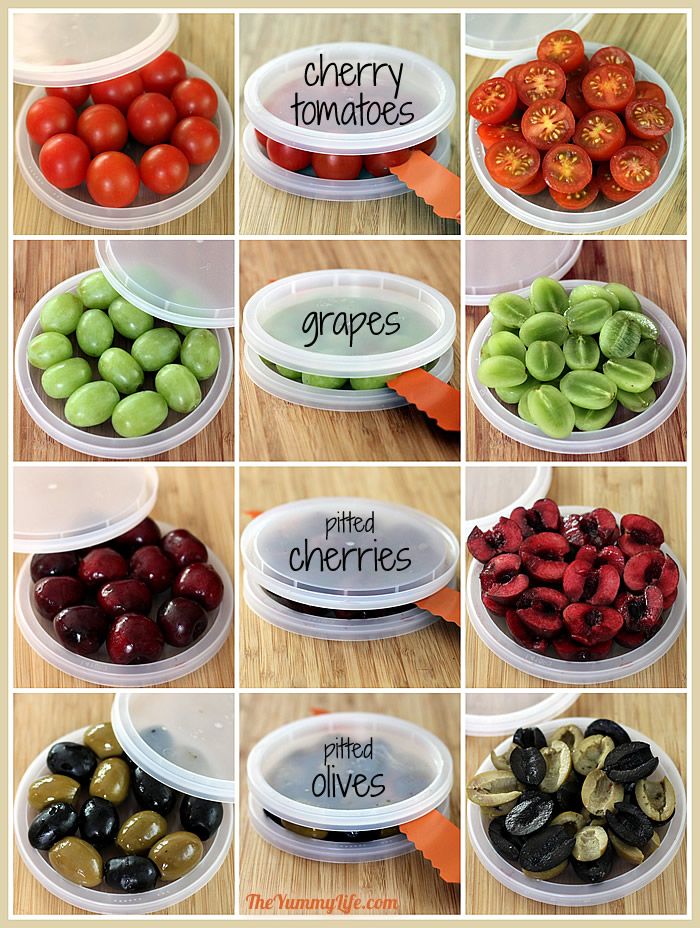 Most any pair of matching plastic lids will do. Flat rimmed lids from yogurt containers, coffee cans, take-out containers, and many plastic storage containers work just fine. If the lids have a raised area in the center, they won't work. They must be flat to achieve even cuts. 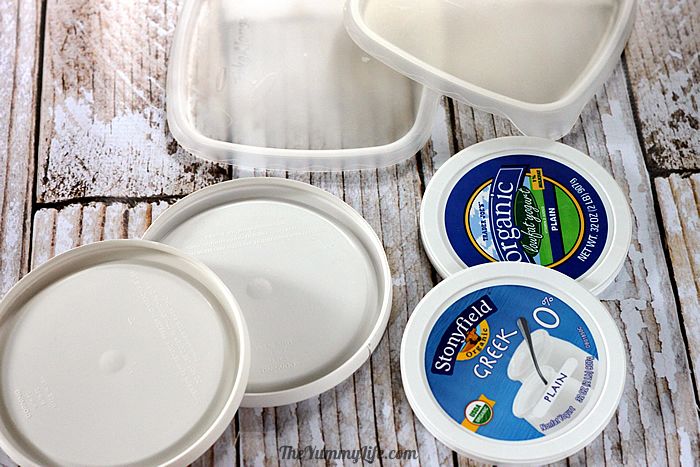 You also need a serrated knife that is at least as long as the widest part of your plastic lids (or plates). My 8" serrated knife was a gift from my friend Sheri (check out her fantastic online yarn and fabric store, The Loopy Ewe). I love this knife. It cuts effortlessly through tomatoes, bread, and more. 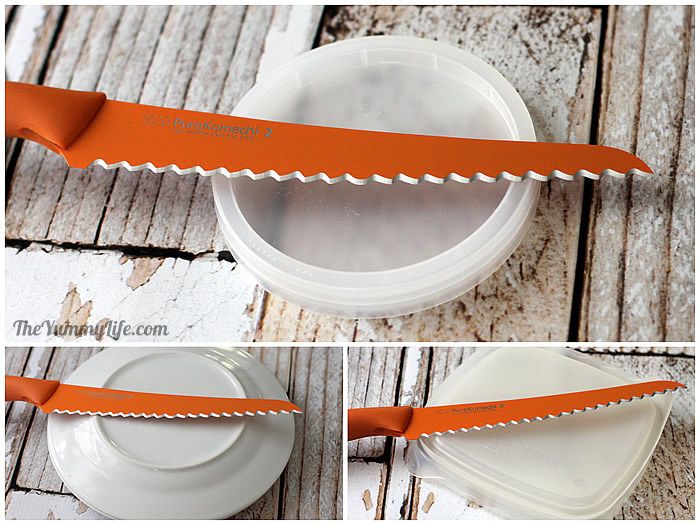 Here I used 32-oz yogurt container lids to cut through 17 tomatoes at once. 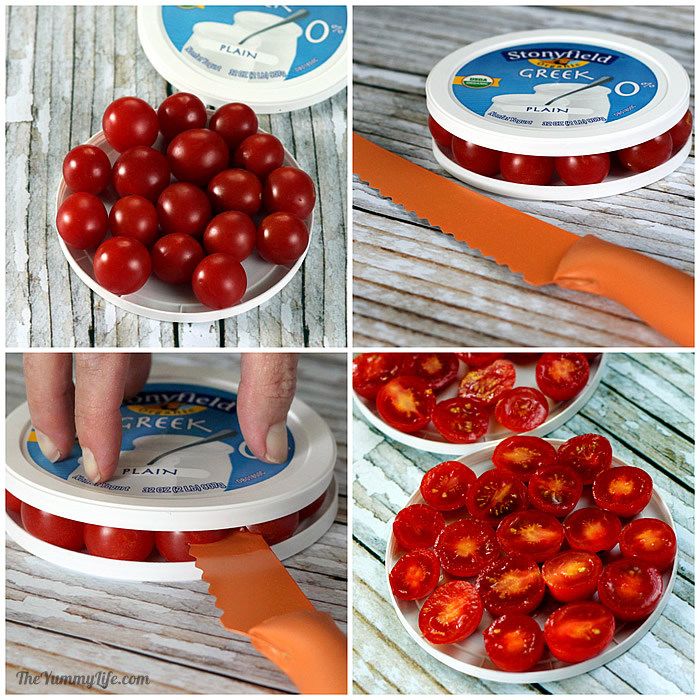 These are lids from some square shaped Rubbermaid storage containers. I could cut through 30 Sungold tomatoes at once with these. I recommend cutting from corner to corner, if you use square lids. 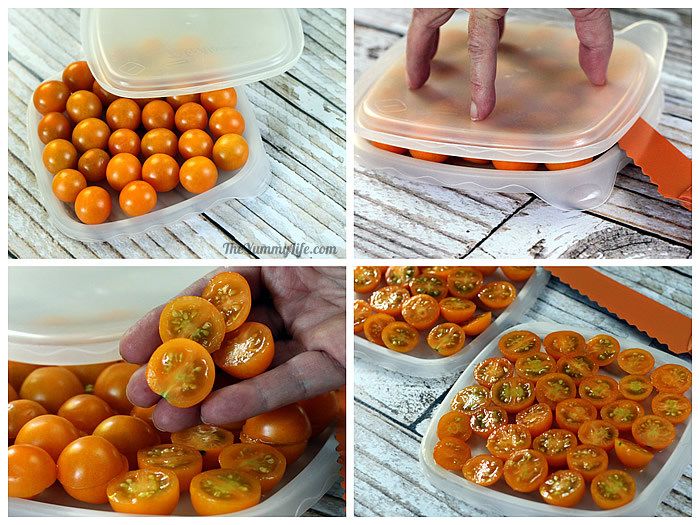 Great results every time! As you can see, the plastic lid method is reliable and versatile. As long as you have a knife blade that is as big as your lids, any shape or size of flat plastic lid will work.

TIP: This method works best with uniformly sized tomatoes, grapes, olives, or cherries. If you have a few in the mix that are considerably smaller or bigger than the rest, I recommend sorting those out and cutting them individually. You'll end up with uneven cuts otherwise.

I tried several plate types & sizes for cutting cherry tomatoes. Conclusion: they can work, but not as well as using 2 plastic lids. Why? 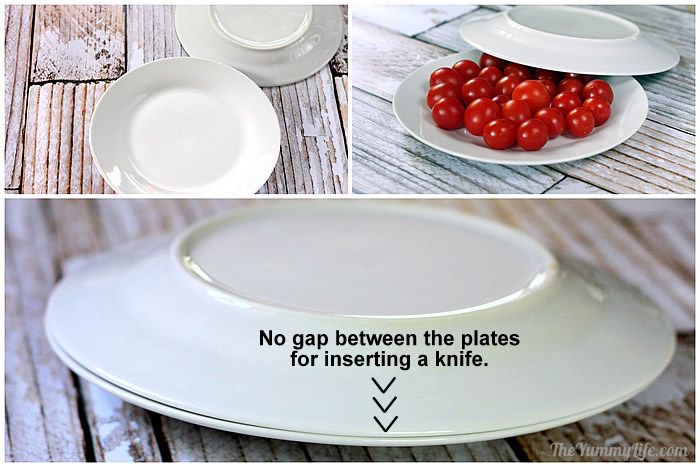 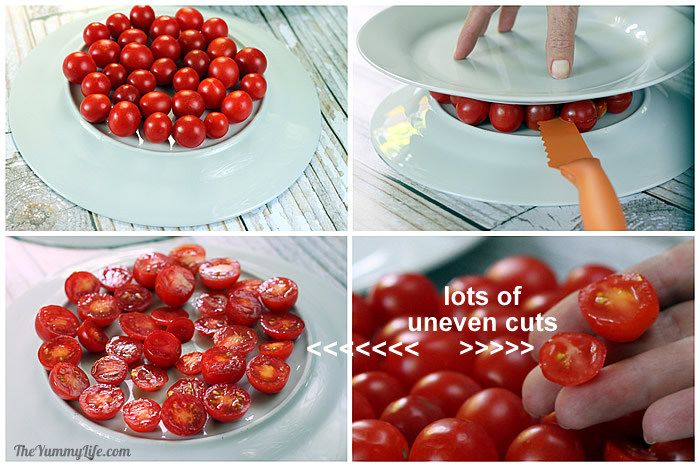 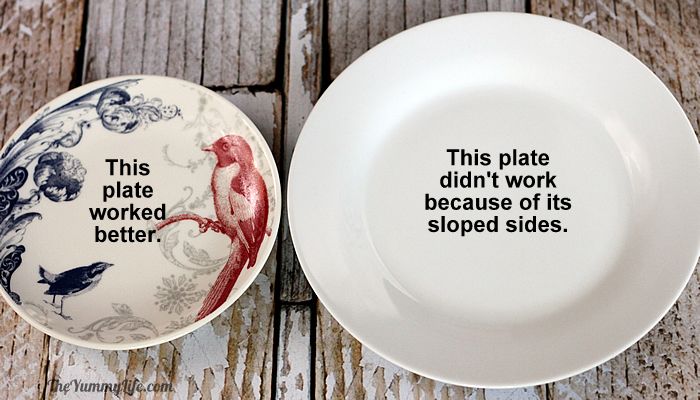 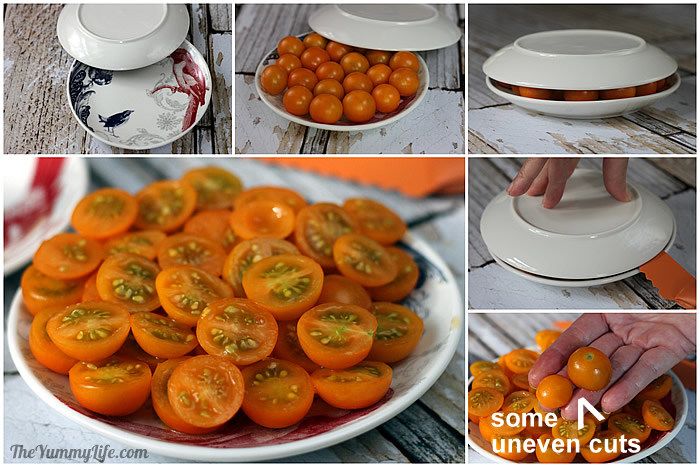 CONCLUSION: You can use either plastic lids or plates for cutting cherry tomatoes, grapes, olives, and cherries, but plastic lids win. They worked better every time.

Store lids where they're handy. I had fun experimenting with this kitchen hack. Now that I've settled on the convenience of using 2 plastic lids for cutting my cherry tomatoes, I store a set of them next to my salad spinner. That way I don't have to hunt around for a matched set every time I want to use them. Having them handy adds to the timesaving benefit of this cutting method. 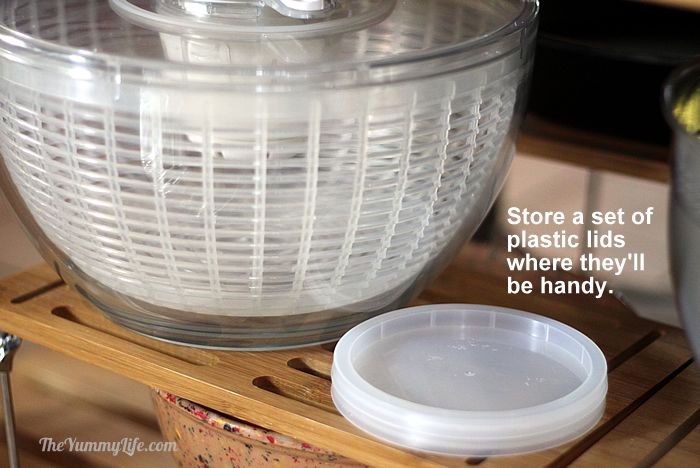 It's so fun to cut cherry tomatoes now that it's easy to get carried away and end up with more than you know what to do with. No worries. Here are two quick, totally delish recipes for you: 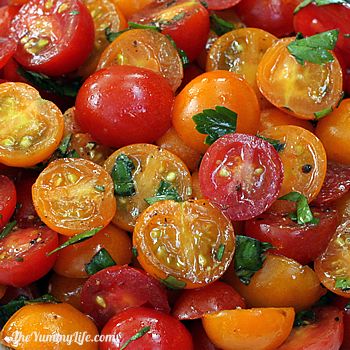 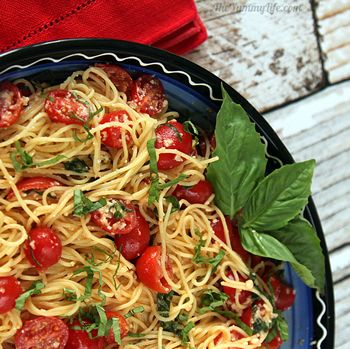 How to Cut Cherry Tomatoes (and Grapes, Cherries, & Olives)
By Monica
Ingredients
Directions
On plastic lid with rim side up, place cherry tomatoes in a single layer. Place a second lid on top of the tomatoes with the rim side down. With one hand, hold & press firmly but gently on top of the lid to hold the tomatoes in place (not so hard that you squash them). With your other hand, cut the tomatoes horizontally through the gap between the two lids. Remove the top lid, and the tomatoes should all be cut in half.

Use the same procedure for cutting grapes, pitted olives, or pitted cherries.


How to Cut Cherry Tomatoes, Grapes, Olives, & Cherries in seconds. All you need are two plastic lids and a knife. From TheYummyLife.com